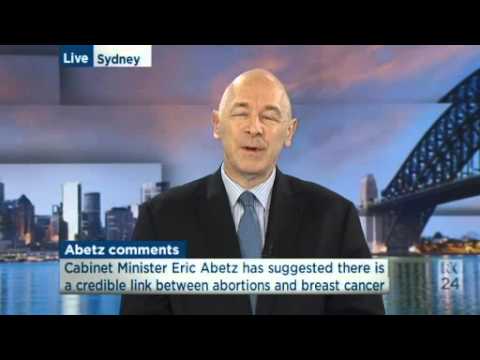 A friend read online that there is a link between abortion and breast cancer because of the change that occurs on women's hormones when they are pregnant. Has this link been proven?

Studies into this myth have been hard to do because of the personal nature of the topic. Abortions were illegal in many countries before the 1970s so data has been hard to gather. The best evidence currently available comes from a large study published in The Lancet in 2004. Researchers considered information from 53 studies conducted in 16 countries, including three in Australia and one in New Zealand. In total, there was information on 83,000 women. The results showed that the risk of breast cancer is not increased in women who have had an abortion or a miscarriage, compared to those who have not. The most comprehensive Australian analysis of the evidence on breast cancer risk factors was published in 2009 by the National Breast and Ovarian Cancer Centre (now part of Cancer Australia). It says: “Recent studies provide little support for the hypothesis that termination increases breast cancer risk, with most suggesting that induced abortions have no effect on the overall risk of breast cancer.” On current evidence we will continue to advise women about the proven risk factors, such as age, alcohol and obesity, and emphasise the importance of mammograms, particularly for women between 50 and 70. Younger women in high risk groups, such as those with a family history of breast cancer, may be screened by MRI.

There is no reliable evidence that Breastlight can help detect breast cancer early. Find out more...